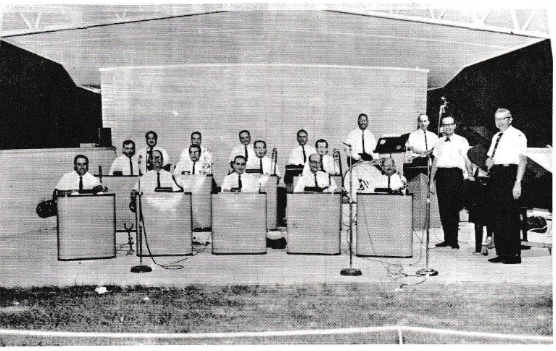 During its long history, McHenry has been very fond of live music. Often times it was played in City Park, now Veteran’s Park. Initially, it was favored for large performances, because of its size and location. Over time, it also offered some of the best parking in town for automobiles. Live music became so popular, there was actually a tax paid every year for the maintenance of a band. The city collectively paid about $750 annually. This was made a priority, even during the Great Depression. During this time, the city built a wooden bandshell for the band to play in. By 1954, the bandshell was in such poor shape, it was deemed unsafe and taken down. Almost immediately, a more permanent bandshell was desired, however, it didn’t happen for almost ten years.

In 1955, it looked like the new bandshell may become reality. However, the project faltered due to a lack of funding and a decrease in popularity. Since the wooden bandshell was removed, concerts were played at City Park and a variety of other places. During this time, the city had a hard time keeping the classic band together. A new band, under the direction of Stanley Vycital, was formed in 1961 playing music from the 1930s, as well as more modern music. The new band composed of five saxophones, four trombones, four trumpets, a piano, bass, and drums. By 1963, the City Council wanted to have the band concerts in a more permanent location, due to the McHenry Band’s events gaining in popularity and an uptick in the vacation population.

Paul Yanda, the city’s former musical director, as well as the bandleader for the high school, and Joe Etten, head of the city council band committee, started to research other venues for ideas in such as a bandshell in Franklin Park. By February 1964, the Council was looking at two models for consideration put together by the Superintendent of Public Works, Fred Meyer. By the spring of 1964, McHenry had a new bandshell under construction and the city band had the first concert in its new home on June 19th. Mayor Donald Doherty started the event with a short speech and the first song was led by Paul Yanda.

The bandshell was modern in construction, measuring 40 feet wide and 17 feet tall at the front, 20 feet wide at the back. It cost $3600 to build and was mainly constructed by city workers. In the back of the shell, there was a storage area for risers and other materials. The risers were one of the main features of the shell, as were stage lights and a public address system. With the new shell, the McHenry VFW Post 4600 donated a piano to be used during the band’s performances. They also provided the band a place to practice at the organization’s clubrooms. The bandshell was to be the cornerstone of an overall improvement of City Park, which included new benches and a landscaping overhaul. It also was to be used for group picnics and community meetings and gatherings.