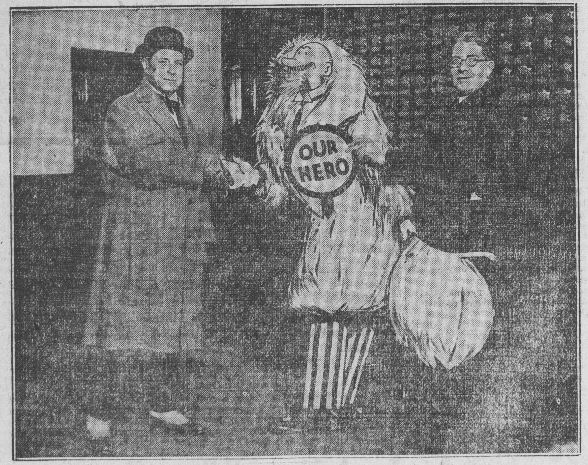 In the early morning of Sunday, October 20, 1935, Wendell Martin was driving down Rte 14, heading to Heartland from his home in Watseka. He was staying in Heartland while working for Melahn Construction Company as a foreman in a road grading crew. While driving just outside of Harvard, Martin noticed the oncoming car was in his lane. The other driver tried to correct himself, but was too late, colliding with Martin at a good rate of speed. His car was hit head-on and went off on its side. Marin suffered a broken hip and jaw, and internal injuries and after a few months in the hospital, he would recover. The other driver wasn’t so fortunate, dying almost instantly of a gruesome head injury after running into a telephone pole. That driver was a man named Sidney Smith.

While little known today, Sid Smith was a huge celebrity in his day. He was the cartoonist of one of the most popular comic strips of the early 1920s and ’30s, “The Gumps” which appeared daily in several papers throughout the nation. The comic featured Andy and Min Gump, offering a comic glimpse at ordinary middle-class life. Smith started the comic in the Chicago Tribune in 1917. Soon the comic’s popularity exploded and it inspired toys, a radio show, plays, and some cartoons. All of this made Smith a very wealthy man. On the morning of his death, Smith was driving to his 2,000-acre farm in Sherland, Wisconsin, which was between Rockford and Beloit. He was finishing off a celebration after signing a new contract with the Tribune reported to be around $150,000 a year. He also owned an 18 room lakefront house, known as Robinswood in Lake Geneva. Smith also had an estate in Howell’s Subdivision in McHenry that he purchased in 1915.

An incident in 1922 illustrated what a colorful life Smith led and gives an interesting look at the man himself. Late on the night of July 1922, Smith ran out of gas on his way home. He managed to flag down five men, from Chicago, in a car that took him to town to get some gas. He then invited the men to his apartment, which was at the Chapel Hill Country Club. After having some refreshments, a “riot” soon took place. The Club was vandalized and Smith’s servant managed to call for help. Several people, including three physicians, arrived and spent the better part of an hour administering first aid. This included Sid Smith, who had a broken wrist and another combatant had a pair of shears that had to be removed from his back. Mercifully, nobody was killed and Smith paid for all of the damages. In the end, the five men who started the fight noted that Smith was a “good fellow”. As for Smith, he healed up and didn’t press charges against the aggressors.

Upon his passing, it was noted that Sid Smith was very popular in McHenry County and well-liked when he spent time here at his house in McHenry. The Bichler place in McHenry was frequently mentioned in the Gump cartoons. He was often a celebrity at events such as when the McHenry Country Club opened up in 1920. Smith was also the president of the Chapel Hill Country Club for a time. When he was in trouble with the incident in 1922, several of his neighbors came running to help because they we told “Sid Smith is in trouble”. In 1924, Smith was seen cruising around Woodstock and McHenry with the Duncan Sisters (Vivian and Rosetta) who were popular vaudeville actors of the time. His car also, somewhat famously, featured the license plate “348”, which was the plate number for Andy and Mim’s car.

Sadly, in celebrating his new contract, Smith decided to stop at the Bubbling Over tavern and a few hours later ran into Wendell Martin. Martin ending up suing the Smith Estate over the accident and was awarded $25,000 in 1937. At the time of Sid’s passing, his estate was valued at $100,000. Smith’s passing didn’t mean the end of the Gump’s however. They would go on and have a long run led by Gus Edson, the new cartoonist, until 1959.