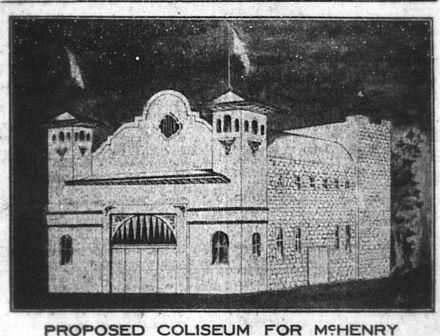 During the early part of the 20th century, McHenry was a booming tourist destination. People from Chicago and the surrounding areas would flock to McHenry to enjoy Pistakee Lake and Bay, the Fox River and other relaxing attractions. Realizing the economic opportunity, McHenry welcomed the tourists having already established resorts and hotels in the area.  McHenry also offered various forms of entertainment such as dancing at the Riverside Hotel/Hall.
The city-fathers realized early on that adding a ground-floor indoor facility that could house a sport, fair, convention or large indoor gatherings could greatly benefit the city’s  economy. This large facility could host events and be a magnet to gather the tourists and local people alike. This was an idea that took shape over time. It appears to have first been mentioned around 1909. However, it really seemed to take on steam in 1912. On February 22, 1912 the McHenry newspaper, the Plaindealer, posted a picture of the proposed coliseum. The plan was described as having steam heating, electricity and bathrooms with indoor plumbing. An earlier account noted that the building would be built from cement blocks and constructed in a semicircular pattern to limit posts and beams obstructing spectators’ views. It would be used to entertain vacationers in the summer and offer new opportunities to the citizens of McHenry in colder weather. 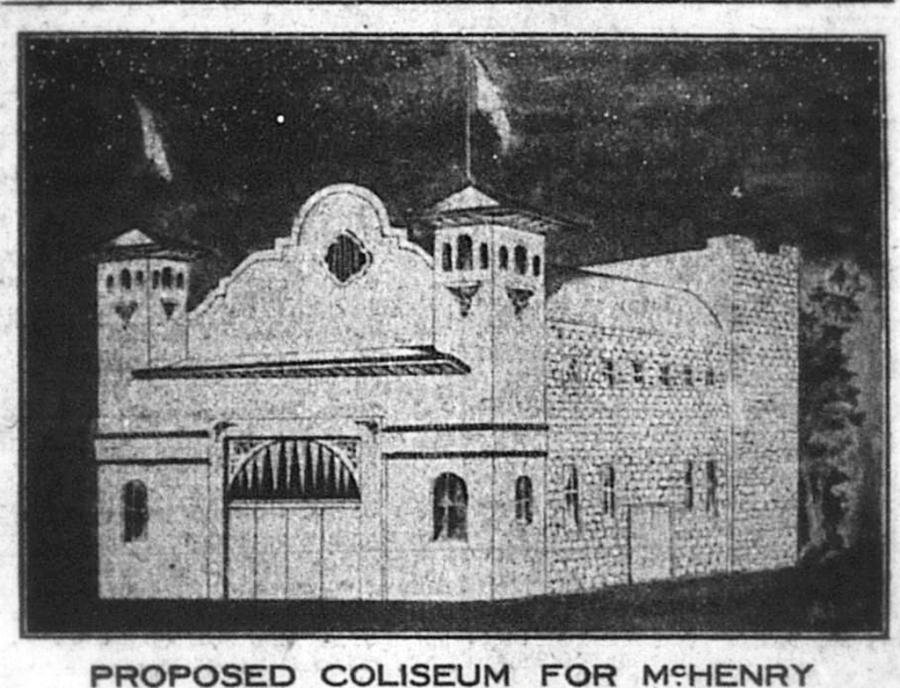 There were a couple of places mentioned for the location of the coliseum’s construction. One location was  the “center of town” and the other was Water Street (now Riverside Drive). The idea was that the people of the city would invest in the project by purchasing shares so the coliseum would be literally for the people of McHenry. One document mentioned about 100 people were willing to invest int the project. In February,1912, an article stated that 3/4 of the funds had been raised and that the construction was all but a certainty. However, the construction never came to be. How close the project came to fruition or why it didn’t materialize is hard to say.  In August,1912, the McHenryPlaindealer newspaper mentions that the idea of a coliseum wasn’t dead and that some citizens wanted to continue with the project. However, there is no further mention of a coliseum anywhere in any McHenry historical documents. It’s interesting to imagine what a building like this could have meant for McHenry’s growth.
Sources
“Coliseum For McHenry?” McHenry Plaindealer 18 Jan. 1912: 1. Newspapers.com. Web. 18 Sep 2016.
“New Coliseum For McHenry?” McHenry Plaindealer 28 Jan. 1909: 1. Newspapers.com. Web. 18 Sep 2016.
“Proposed Coliseum For McHenry.” McHenry Plaindealer 22 Feb. 1912: 1. Newspapers.com. Web. 16 Sep 2016.
“Coliseum Not A Dead Issue.” McHenry Plaindealer 8 Aug. 1912: 1. Newspapers.com. Web. 18 Sep 2016.