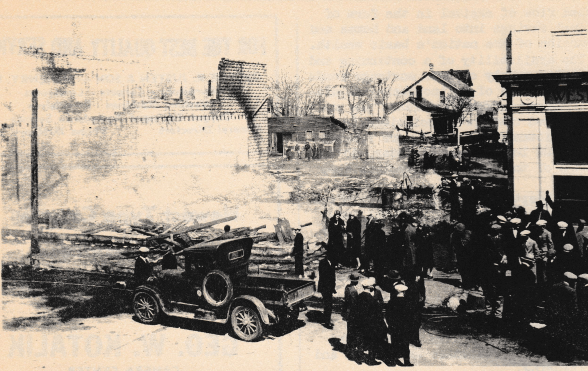 In the early morning of April 11, 1926, Mathias Laures was walking down Main Street in West McHenry when he noticed a fire in the back of the Justen Furniture & Undertaking business. He quickly spread the word, which included blowing the large whistle at the Borden Factory summoning help. Yet but by the time help arrived, three timber-framed buildings were engulfed in flames. They included the Justen Furniture Store, Althoff’s Hardware Store, and the West McHenry Post Office. The Wagner family who was living above the Justen store and the Althoff family living above their store were all lucky to make it out relatively unharmed, despite the fact that two of the Althoff children were very sick with pneumonia. The fire could be heard for miles as the buildings fell and the shattering glass. Not to mention, many items in the hardware store were explosive such as paints and bullets.

Thankfully a new business to the west, Morrow & Son’s Garage, was under construction and was being made from cinder blocks, which probably stopped the spread of the fire. Due to the speed of the fire and that citizens were safely out of harm’s way, those fighting the fire mainly focused on containment. After the fire was finally done, the three buildings mentioned were completely destroyed, as was the interior of the West McHenry Bank which was right next door to the Justen building. This incident was noted as being one of the worst fires in McHenry County in many years. Despite the destruction, things might have been far worse mainly thanks to the heroic efforts of the McHenry Fire Department, as well as the fire departments from McHenry County and Crystal Lake.

The fire had barely begun to cool when Nick Justen stated that he intended to rebuild his store at the same location. Even though there was over $75,000 in damages, thankfully all the properties concerned were insured. William Althoff was able to save some of his merchandise and temporarily moved in with W.J. Donavin, a plumber, whose business was across the street. The Postmaster, E.E. Bassett moved the post office over to the Schiessle building across from the fire. Despite the cramped conditions, he was able to offer full postal service. Nick Justen & Althoff started construction on April 14, using the fire as an opportunity to modernize their stores, including making the building from a steel foundation, cinder blocks, brick and oak floors.

With excellent cooperation between all parties involved, by August, all of the construction had been finished. The new Justen building measured in at 35×75 and the Post Office 17×27, both with new modern display windows. On August 14, both the Justen and Althoff stores had grand re-openings, including flowers for the ladies and cigars for the gentlemen. Over 600 people came to the celebration, about 3 times as many as the proprietors had hoped. The Post Office was also able to show its new establishment, including attractive new cabinetry, steel counters and 300 mailboxes for customers. Over time the businesses moved out, and in the school district moved some of their offices into the building. In 1996, the school moved out and the building was razed to make some parking spaces.